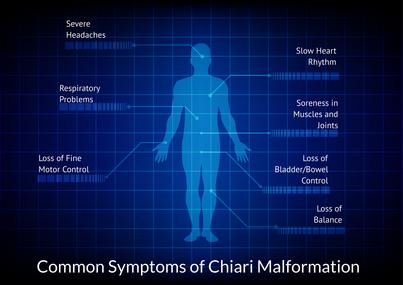 This is for informational purposes only, and a doctor is the only one who can diagnose your medical situation. 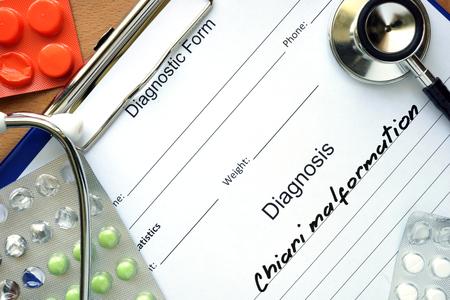 The expansion of this cyst can damage the spinal cord, which can cause hand weakness, sensory loss, and possible paralysis. Chiari malformation can be classified into three separate types, the most common Chiari malformation is Type 1. Chiari I malformations typically occur at birth. They usually do not have
​ symptoms until the symptoms are prompted as a result of an injury trauma from an accident. If you have been in an accident and you experience these symptoms, only a medical professional can diagnose your medical situation:

Less often, people with Chiari malformation may experience ringing or
buzzing in the ears (tinnitus), weakness, slow heart rhythm, the curvature of

breathing, such as central sleep apnea, characterized by periods of

breathing cessation during sleep, and, in severe cases, paralysis.

doctor. Diagnosis of a Chiari 1 malformation is made through consultations

with a neurologist and is further confirmed through an MRI.
Although every case is unique, a decompressive surgery of the opening of the base of the skull, ​ known as the foramen magnum, may be necessary to correct the defect.

Contact our Chiari Malformation Attorneys if you or a loved one has been suffering from Chiari malformation Type 1 symptoms resulting from a trauma caused by someone else or if you have been a victim of medical malpractice due to a surgical attempt to correct Chiari 1 Malformation. We understand the pain and trauma that comes from medical mistakes and will fight to ensure you receive the proper outcome to rectify your injuries. Contact an experienced medical malpractice attorney or personal injury attorney at The Law Offices of Michael O’Day to review your Chiari Malformation case today.